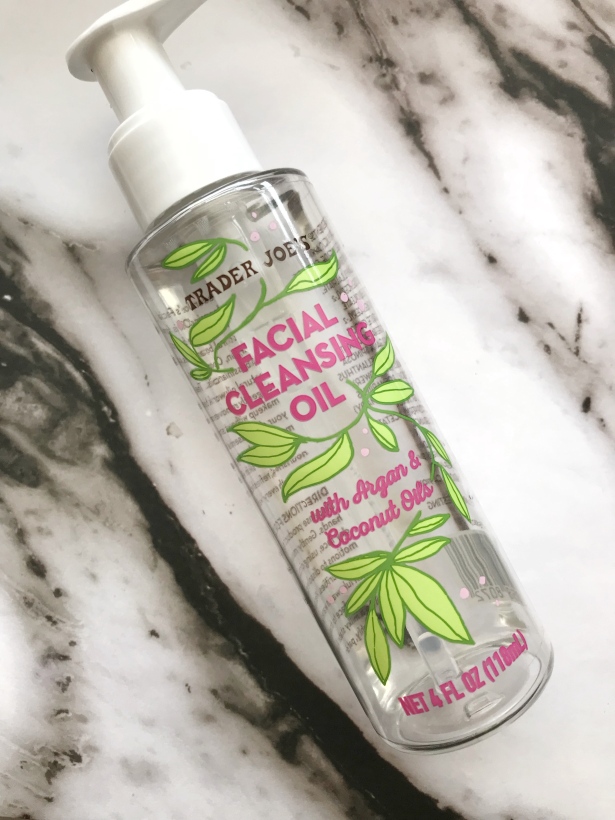 A few weeks ago I found myself panicked after receiving a shipment from one of my favorite AB (Asian Beauty) website, an empty oil cleanser in my bathroom and a sad reminder that I was supposed to include an oil-based cleanser in my shipment. This led to rushing through the rows of Target’s beauty aisles while I thought about how subpar my cleansing routine would be later that night. Being the millennial that I am I do all my weekly grocery shopping at Trader Joe’s and lucked out when I saw they had an oil cleanser in stock. However, being the beauty scientist that I think I am, I tend to not buy ~organic~ and ~natural~ beauty products just for the sake of being stubborn, but after reading the ingredient list I decided to give this oil cleanser a try.

After a few months of use, I’ve decided how much I actually appreciate this product. The oil is very thin, despite having fragrance listed in the IL it isn’t strongly scented, and makes for a lovely massage oil. I use one pump of oil every morning & night and perform a 1-minute long facial massage to start removing oil, makeup and kick start my facial muscles. For only $6 I would 100% recommend this product to anyone as a starter oil cleanser. It’s effective at removing all makeup (eyeliner, mascara and matte lipsticks), extra sebum, and other impurities.

The primary ingredient of this cleanser is caprylic/capric triglyceride which is an emollient, dispersing agent and solvent that is derived from coconut oil. Lately, the beauty world’s attitude of coconut oil has shifted from a do-all miracle product to a comedogenic nightmare (P.S. – if you’ve read Lab Muffin’s post about comedogenic products you might be convinced that it isn’t an effective measurement for pore-clogging ingredients). While I do not suffer from acne I am very breakout prone and tend to purge a lot when testing out new products. This cleanser did not lead to any breakouts or purging bumps so that was a HUGE plus for me. I typically deal with 1/2 a week of purging anytime I start a new product but this oil cleanser was golden for my skin.

Being an emollient and dispersing agent capric triglyceride is super spreadable and can carry other ingredients – like the rosemary extract found on the ingredient list. Caprylic/capric triglyceride is a very common ingredient found in many personal care & cosmetic products purely because of its texture and spreadability. The texture is the major selling point of this ingredient that makes it ideal for an oil cleansing product. As far as drugstore cleansers go, this is my favorite one thus far!

Have you tried the Trader Joe’s Facial Oil Cleanser? let me know what you think!