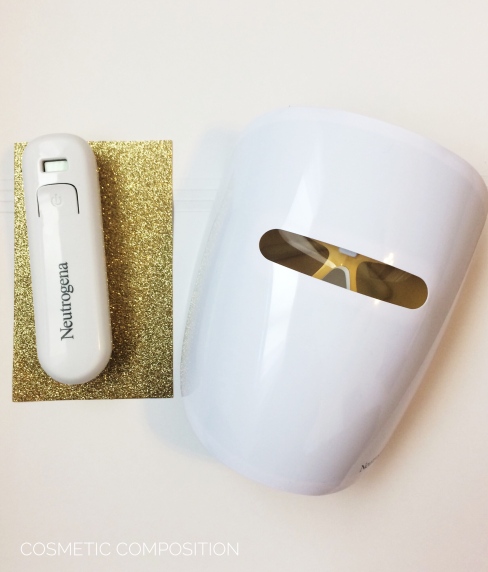 A big predicted trend in skincare for 2017 is technology and at-home devices for consumers. I jump started the trend for myself by asking for Neutrogena’s new light therapy mask for Christmas – and looking like the biggest dork on Christmas day for being excited about an acne mask. But it’s really a cool skin care product when you think about it, a mask that offers daily treatments to help with acne and the inflammation that follows.

I was very impressed with Neutrogena’s packaging on this product. The back of the box contained a simple photo explanation of how the LED lights work and at the bottom, they cited three scientific pieces of literature (I was low-key freaking out about this). The mask is FDA approved, and the website has super helpful information about the science behind this mask. The concept is fairly basic, the red and blue LED lights each treat a different symptom. Blue light kills p. acnes bacteria, red decreases inflammation. They have interactive graphs on their website that show results from a Johnson & Johnson study that look at overall acne, pimple skin, redness, and skin texture. (Note Johnson & Johnson owns Neutrogena, so these studies were company sponsored). 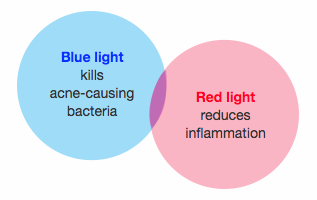 Of the three studies, two of the studies focus on the red-blue light combination and one simply focused on blue light effects. A study published in the journal FEMS Immunology & Medical Microbiology focused on blue light as a treatment for p. acnes, the bacteria that causes acne formation. According to the study “X-ray microanalysis and transmission electron microscopy revealed structural damages to membranes in the illuminated P. acnes. Illumination of the endogenous coproporphyrin with blue light (407–420 nm) apparently plays a major role in P. acnes photoinactivation”. Essentially this explains how blue LED light inactivates the bacteria from forming any acne. 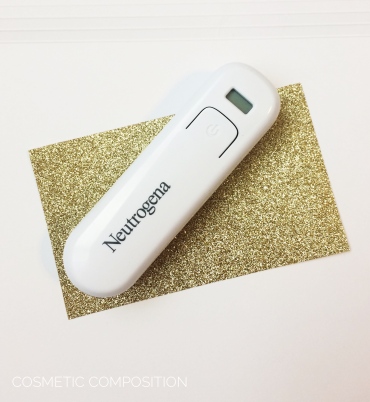 A 2006 study published in the Journal of Cosmetic and Laser Therapy completed a clinical trial of 24 participants with Fitzpatrick skin types II – V and examined the effect of red and blue LED lights on acne. After 12 weeks of treatment, twice a week, and alternating between blue (415nm) and red (633nm) light, the results were examined. Researchers found an 81% reduction in the mean lesion appearance on participants skin. Additionally, they noted that the practice was safe, and appeared to be more effective for severe acne rather than mild. 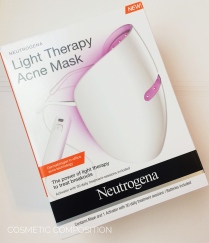 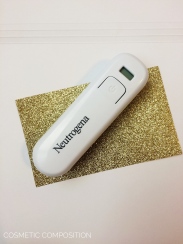 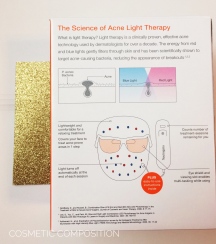 Aside from getting multiple “What’s the Iron Man mask thing?” texts I absolutely love this mask so far. Before receiving it I was unaware that it was meant for daily treatments; however, since I have mild acne but do suffer from frequent breakouts I’ve been using the mask once a week. The mask offers 10-minute sessions and I would recommend that you keep your eyes closed and off your phone – it is extremely disorienting, that lasts for 30 uses. The clicker has a great countdown for the number of sessions left which means you don’t have to keep track of anything. One of my favorite features of the mask is that it basically forces me into a meditative state for 10 minutes which has actually been extremely relaxing, as I usually do the mask right before bed. Once the session is over I notice that the skin around my acne is less inflamed but is red, but the redness disappears within the hour. I apply an overnight mask after the 10 minutes and wake up with significant changes in my acne. It hasn’t eliminated any but it has severely decreased my acne bumps in size. Looking back I’m thinking of doubling up uses during my monthly cycle as an extra measure to help control my acne that week. 10/10 I enjoy this mask so much. I’ve only used it 4 times, so while I haven’t noticed any huge differences yet, but the forced 10-minute meditation is definitely worth it.

This was not a sponsored post, all opinions are my own.